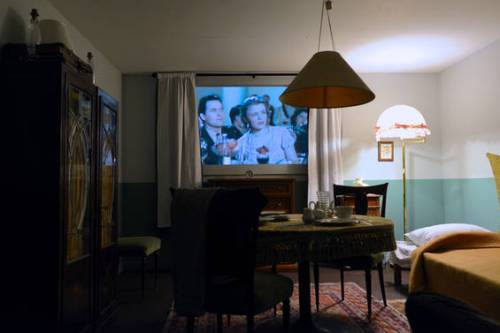 Beginning his artistic career as a children’s book illustrator, Russian artist Ilya Kabakov is no stranger to the powerful yet poignant force of illusion. In their artistic partnership, he and his wife Emilia Kabakov move fluidly between visual art, history and philosophy as they create what they call ‘total installations’, atmospheric environments designed to immerse the visitor.

Westminster University’s warehouse-like Ambika P3 space hosts their installation ‘The Happiest Man’ until 21 April. Rows of red velvet cinema seats face a screen streaming clips of Soviet Socialist Realist films, which show Russian peasants working the bucolic land and singing with joy. Each frame reminds of the hardship endured by Russians at the time, who would have sought release in such cinematic opiate. The films are looped, and the repetition of scenes that celebrate the characters’ happiness seems forced, dreamlike, and fraught with nostalgia.

The films appear particularly melancholic when framed by the window of a small, self-contained living room placed in the middle of the auditorium, a room belonging, in the artists’ minds, to ‘The Happiest Man’. Such a person exists theoretically in the Kabakovs’ imaginations, yet the room’s phantom resident becomes touchingly, eerily alive in the details: the crocheted rug tacked on the wall, the shirt thrown carelessly on the arm of a chair, the neatly laid table ready for tea, the suitcase on the glass-fronted wardrobe. Seated on the couch the visitor sees the cinema screen’s images beamed seamlessly into the room and, one presumes, the imagined psyche of the room’s owner.

While ‘The Happiest Man’ tells a story particular to the 1930s, the Kabakovs’ talent lies in opening up that narrative to comment on today’s society, a society in which images of celebrities are glorified and brought into our homes as readily as the political propaganda of the past.