This preview was first published in World of Interiors’ September Issue 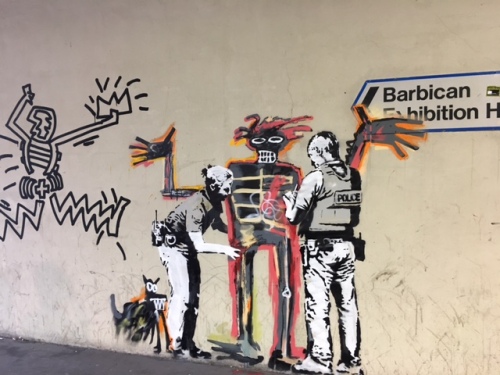 “The only thing that has ever interested me,” Jean-Michel Basquiat said to lover Suzanne Mallouk, “is a blank page.” Add letters, refrigerators, televisions, clothes, vases, spare pieces of wood, postcards, doors, windows, exterior and interior walls, and Basquiat was painting the urban canvas of New York city itself. A brilliant self-taught colourist and draughtsman, plurilingual Basquiat was the Brooklyn-born son of middle-class Haitian and Puerto Rican parents. As a child, Basquiat told his father, “Papa, I will be very famous one day”; as an adult, he altered art history, collaging eclectic influences– which included Beat poetry, Bebop jazz, Dadaist mythology, history, Afrocentricism, philosophy, hip hop, anatomy, cartoons, television and everyday conversation – like multiple open browsers on the internet. That Basquiat achieved titan status with a career that barely spanned the years 1978 and 1988 – when his life was cut short by heroin – is astonishing.

The first show in 20 years and on this scale, Boom for Real presents Basquiat as the ultimate multi-hyphenate meshing ambition with intellectual acuity. Words, he said he used, ‘like brushstrokes’; they formed complex vessels of meaning and startling pictorial shapes on his canvases. The exhibition will include a partial reconstruction of Basquiat’s first body of work created for the landmark group show New York/New Wave at P.S.1 in 1981, an exploration of Basquiat’s acerbic statements through his graffiti moniker SAMO (including a precociously witty story he penned for his school newspaper, from where the acronym ‘same old shit’ originated), and a section on the artist’s relationship with Warhol.

While associated most closely with 1980s Neo-expressionism, Basquiat was influenced by artists from Leonardo da Vinci to Picasso, Joseph Beuys and Cy Twombly. Untitled, 1980, made with spray paint and oil stick, presents a large canary-yellow work of enamelled metal made for the P.S. 1 show. In the top left-hand corner is spray-painted the words ‘New York New Wave’. Further down, the letter ‘A’ repeatedly descends from a plane to a car. Typical of Basquiat, the work offers simultaneous meanings, visually alluding to the city’s fractured, percussive rhythm, Twombly’s interest in ancient Greek graffiti – specifically shown in his painting Apollo and the Artist (1975) – and the A-bomb of Hiroshima the concept of which had very much impacted Basquiat.

Three years before he died, Basquiat told a Channel 4 interviewer that, ‘my mind affects my work more now than it used to, I used to work more heart to hand.’ It is poignant – and pointless – to reflect on what further changes would have taken place in his practice had he not passed away so young, yet Basquiat’s critiques on racism, black masculinity and police brutality have become more resonant, not less so. Beyond splashing paint in Armani suits, being Warhol’s confidante and Madonna’s beau, Basquiat made art that impacts immediately and lingers permanently. Boom for Real will remind us of the talent behind the supernova status that routinely fetches millions at the auction house.